The recent police killings of George Floyd, Breonna Taylor, and Tony McDade have sparked outrage across the United States and left many wondering how we can rise to meet this political moment. Police, however, aren’t the sole perpetrators of violence against Black people: Nina Pop, a Black trans woman, was fatally stabbed outside her Sikeston, Missouri, apartment on May 3, 2020. On June 1, a group of men in Minneapolis that included cisgender Black men brutally attacked Iyanna Dior, a Black trans woman. Two other Black trans women, Dominique Fells and Riah Milton, were killed on June 8 and June 9, respectively. And 19-year-old activist Oluwatoyin Salau was sexually assaulted and found dead on June 13 in Tallahassee, Florida.

Given the ongoing uprisings, we’re facing a moment of political possibility: Local governments and activists are working to incorporate and envision alternative forms of justice outside of policing and prison systems. Yet, we must also recognize the persistence of gender-based violence toward Black cisgender and trans women. We can’t rely on the prison-industrial complex to address these problems, since these systems are often responsible for ignoring or further inflicting violence on Black women. However, we can look to Black feminist politics and abolitionist organizing for more inclusive pathways to a world rooted in safety, mutual aid, and restorative justice. Black feminists and abolitionists teach us to demand more, even in a moment when it seems like we’re already fighting for so much.

According to the National Organization for Women, more than 18 percent of Black women will experience sexual assault in their lifetime. Four in 10 Black women report experiencing intimate partner violence, more than 20 percent are raped, and Black women are more than 2.5 times more likely to be killed by a man than white women. In 2019, at least 27 transgender or gender-nonconforming people were violently killed, at least 19 of whom were Black trans women. Furthermore, according to the 2015 U.S. Transgender Survey, 20 percent of Black trans people reported being unemployed and 38 percent reported living in poverty. Fifty-one percent of Black trans people reported experiencing housing insecurity in their lifetimes.

The state consistently fails Black women and Black trans people by failing to redress these issues as well as inflicting more violence. Intersectionality, first introduced by legal scholar Kimberlé Crenshaw in 1989, names the unique struggle of Black women as both racialized and gendered beings when facing a legal system prepared to address discrimination on the basis of race or gender, but poorly equipped to handle both at the same time. Due to this illegibility of Black women before the law, calling on the police to address gender-based violence might put survivors in further danger due to, as scholar Beth Richie describes in her book Arrested Justice: Black Women, Violence, and America’s Prison Nation (2012), either state agencies’ lack of response to violence against Black women or the violence Black women and girls experience directly at the hands of state agencies—including police and prisons.

When Bresha Meadows was 14, she was arrested and jailed for 18 months for killing her abusive father. While incarcerated, she was denied adequate care for her post-traumatic stress disorder, she says. Marissa Alexander was convicted of aggravated assault after firing a warning shot to ward off her abusive husband and subsequently spent nearly six years under state supervision. Bettie Jones and her neighbor Quintonio LeGrier were shot by Chicago police arriving to address a domestic disturbance at LeGrier’s apartment. Seven-year-old Aiyana Stanley-Jones was asleep on her couch when police broke into her home and shot her. The 2015 Say Her Name report from Crenshaw’s African American Policy Forum discusses the sexual violence Black women, trans, and queer people experience at the hands of police.

Police officer Daniel Holtzclaw sexually assaulted at least a dozen Black women and girls, and police officer Ernest Marsalis raped a 19-year-old Black woman during an arrest. Black trans, queer, and gender-nonconforming people are profiled, harassed, and misgendered by police and unprotected in prisons. In 2008, a booking officer repeatedly called Duanna Johnson a number of slurs before restraining, beating, and pepper spraying her. Seventy percent of Black transgender people who interacted with police from 2014 to 2015 said that they are never or only sometimes treated with respect from law enforcement. Trans women face high rates of sexual assault when incarcerated, with 20 percent reporting being sexually assaulted by fellow inmates or staff from 2014 to 2015.

Bringing these groups to the forefront of the struggle against police violence creates a fuller picture of the ways police abuse their power against Black people. To address violence, then, we can look to Black feminist politics and activism to seek a more expansive politics and visions of justice that do not rely on the police and prison-industrial complex. 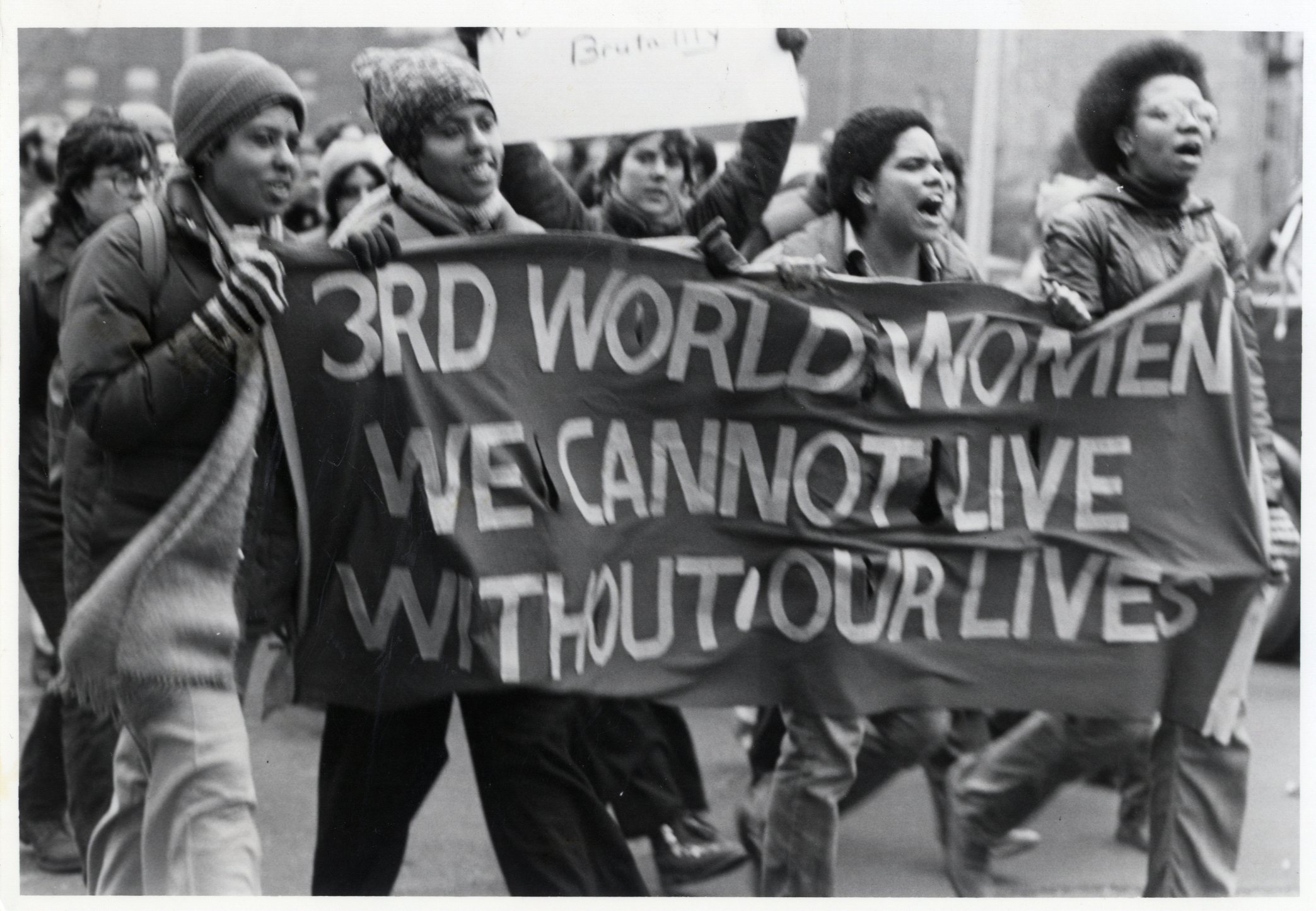 Members of the Combahee River Collective march in the Boston Common in 1979 to protest the lack of media coverage and police attention for Bellana Borde and other murdered Black women. (Photo credit: Susan Fleischmann, Gay Community News Photograph Collection, The History Project)

The Combahee River Collective, a group of Black feminists and lesbians, released a statement in 1977 calling for an anti-capitalist solidarity politics that accounts for race, gender, sexuality, and class. When we consider the complexities of a person’s identity, we can take into account the specific risks they face and recognize how society could be better equipped to address those risks. As Black lesbian feminist socialist poet Audre Lorde declares in her 1980 essay, “Age, Race, Class and Sex: Women Redefining Difference,” “Refusing to recognize difference makes it impossible to see the different problems and pitfalls facing us as women,” and that without attending to difference in race, class, gender, and sexuality, we can’t “develop tools for using human difference as a springboard for creative change within our lives.”

Black feminist bell hooks’s seminal 1984 book, Feminist Theory from Margin to Center, emphasizes that marginality gives a “special vantage point” from which we can critique sexist, racist, and classist social structures as well as “envision and create a counter-hegemony.” Naming differences helps specify the forms of oppression we face, or for which some of us are uniquely at risk. It helps recognize the true depth of social problems and devise better solutions. Black feminist and queer politics are an important political antecedents for the Movement for Black Lives, which serves as an example of margin-to-center activism. Though it may seem that the broader Black Lives Matter movement is primarily animated by the police killings of Black men, its leaders have long called for a politics that centers the most marginal among us. In the Black Lives Matter “herstory,” founders Opal Tometi, Alicia Garza, and Patrisse Khan-Cullors lift up the need for Black movements to center Black queer and trans people in both advocacy and leadership.

Furthermore, in her book, Unapologetic: A Black, Queer, and Feminist Mandate for Radical Movements (2018), the Black Youth Project 100’s founding national director, Charlene Carruthers, lays out the Black Queer Feminist lens as an organizing praxis wherein folks “bring their full selves into the process of dismantling all systems of oppression.” Queerness, as Carruthers refers to it, isn’t solely about sexuality, but also the “continuum of possibilities outside of what are considered to be normal sexual or gender identities and behaviors.” Carruthers writes that the Black Queer Feminist lens is rooted in collectivity and reminds us that “none of us will be free unless all of us are free.” In the context of this movement and this moment, we must understand abolition as meaning not only the end of police, but also the beginning of a society and a solidarity that recognizes differences so that we may address all sites of harm.

In Are Prisons Obsolete? (2003), Angela Davis challenges us to “imagine a constellation of alternative strategies and institutions” to replace the function of the prison in our society, focusing on decarceration as a societal goal. Decarceration would require doing away with imprisonment as a penalty and shrinking the incarcerated population. To accomplish this goal, Davis recommends a justice system specifically focused on “reparation and reconciliation.” However, Davis calls for a fuller solution beyond eliminating police and prisons. She writes that we must work for the “radical transformations of many aspects of our society,” including “racism, male dominance, homophobia, and class bias.” This means creating and expanding institutions that focus on promoting violence prevention, health, and safety and committing deeper state investment in schools, hospitals, neighborhoods, social workers, housing, and a living wage. Importantly, Davis asks us to question the very relationship between crime and punishment and recognize the constructed links between race, gender, class, and crime.

To address gender-based violence, Richie cites the joint statement by the abolitionist organization Critical Resistance and the feminist of color collective, INCITE!. The statement calls for community-based responses to violence that promote accountability for survivors, political education, funding to social justice organizations, and mobilization against sexism and homophobia. Abolition is a tall order. But to meet this moment and end state violence in all its forms, we must recognize the multiple modes of vulnerability the most marginalized among us face. Abolition means the very restructuring of our society, of what and who we value, and how we conceptualize crime and punishment. This will require addressing violence holistically and taking into account its root causes, including white supremacy, toxic masculinity, and social and economic exclusion. This will require us to get involved with one another, to help our neighbors address and repair harm in our communities. A future without violence, police, or prisons demands an embrace of political collectivity and showing up together for all our people.

Calling IN: A Less Disposable Way of Holding Each Other Accountable