State Of War, An Excerpt From “The Nation On No Map: Black Anarchism & Abolition” 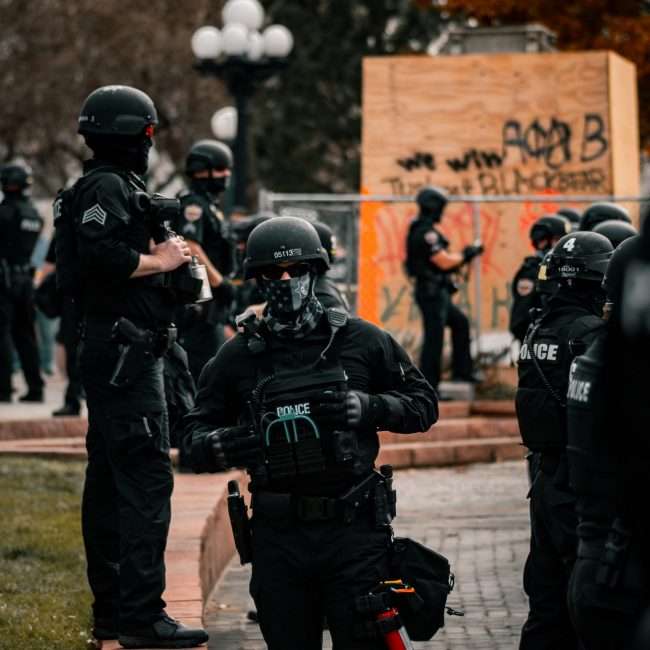 Saying “stop killing us” and asking an oppressor not to oppress is not going to work. Taking the life of the system we’re up against through abolition is much more complex than simply fighting people in the streets. We need to eradicate the very structures that enable the state to continue systematically destroying our lives. Oppression tortures our existence through the forces that live comfortably in the minds of countless people they oppress. The conflicts created and exacerbated by the oppressive mechanics of the state are not evenly distributed. Some neighborhoods and some people within our communities know destruction in intimate ways that involve infighting and traumatic violence. Black women and girls—especially those who are queer, transgender, poor, and disabled—experience this in the most extreme forms, with their very right to survive called into question. “What the law designated as crime,” writes Saidiya Hartman “were the forms of life created by young black women in the city.”[1] If these women and girls defend themselves, they are criminalized for it, as abolitionist Mariame Kaba documented in the anthology No Selves to Defend.[2] Therefore, women and girls in this predicament have been a primary basis for my conception of self-defense, community, and survival amid conflict.

In As Black as Resistance, Zoé Samudzi and I touched on “Black gangs that were born of necessity and are often far better organized than those who denounce them would ever give them credit for.”[3] We also noted that these gangs had been politicized at the same time as the social struggles in the 1960s and 1970s and became part of the movement for self-defense and community control. It bears repeating that we shouldn’t ignore gangs and others who have been shunned as we think through these questions.

What does it mean, for instance, to strengthen our communities and build survival programs, when there is no functioning left opposition in the United States that could defend them against militarized police forces, fascist militias, and military assaults? Just because reactionary forces have not freely carried out the full-scale massacres of large numbers of unarmed people all at once, it doesn’t mean they never will. If (or when) that time should come—and if Black people manage to wrest real political and economic autonomy for ourselves, it will—many people will need to know how to fight back.

People imagine history’s revolutions, rebellions, and insurrections in such an idealistic way that they become fairy tales that require magic wishes more than training or planning. As our enemies stockpile, plot, and prepare, far too many act as if merely our love of liberatory ideas will save us. As it often has been throughout Black history, armed self-defense should become more of a serious consideration in the future. We will not be given a choice. Those who are most familiar with fighting in the streets are needed too, which will require people to look beyond the trauma and the stigma of “criminality.” Such transformations should recognize and center the experiences of the women, children, sex workers, and other community members who have borne the brunt of violence. This means we must also address how regularly they must protect themselves from the likes of gangs and the militaristic, patriarchal violence that creates constant clashes. Like the gangs, they know how to fight and resist and defend themselves in ways many of us can learn from.

There are many potential allies out there with the knowledge that pontificating radicals on the left lack. Those people might or might not identify as part of the organized left. We shouldn’t feed into the vanguardist binary that makes “the people” who don’t identify as leftists or radicals into masses in need of leadership. Our respective stories and different struggles will vary from community to community. No one should be carelessly left behind. We also have much to learn from revolutionaries who preceded us and were discarded at times themselves. Assata Shakur, Lorenzo Kom’boa Ervin, Malcolm X, and George Jackson are just a few examples of hugely impactful people who were designated “criminal.” Their militancy or willingness to address questions of actual confrontation cannot be separated from how they understood the realities of the streets. By the same token, there are many young Black people in the streets, alienated from social movements but with needed energy for liberatory politics. There is certainly crucial organizing to be done among members of groups that get left out of the conversations of both the left and the main-stream nonprofit organizations in the process of movement building.

When we look to our families, many of us will find a history of organized self-defense there too. For one thing, many of the Black anarchists and radicals I’ve mentioned are former members of the military, including Martin Sostre, Lorenzo Kom’boa Ervin, Kuwasi Balagoon, and others in the Black Panther Party. Each of them enlisted with different histories and brought back their own lessons. Balagoon, for instance, was a bisexual man in the U.S. Army. His experience—who he was and who he became—informed the militancy he later engaged in with the Black Liberation Army. There are others like him among us who also carry knowledge and understanding of warfare that we should familiarize ourselves with. Understanding this doesn’t mean embracing imperialism or the military. I am referring simply to information and strategic thinking that should be taken into consideration based on our circumstances. We are not talking about fighting for the sake of fighting; it’s about the larger political goal of achieving liberation. Recent uprisings and rebellions we’ve seen have often lacked organized self-defense components. At the same time, many of the armed self-defense mobilizations we see today are showy demonstrations of symbolic force unconnected to actual communities in struggle—parades and marches that defend nothing. The task of revolutionaries, as Lorenzo Ervin has explained, is to “push rebellions to [an] insurrectionary stage, and the insurrection to a social revolution.”[4] War is not coming. War is already here all around us, and we’re already engaged, systematically, as casualties. To change that takes planning and preparation and direct confrontation.

If we’re waiting for the worst to happen every time, we should expect defeat. In fact, we’re beating ourselves. Our advancement requires a proactive effort to abolish the violent institutions of the white supremacist state. Black anarchism reveals to us that revolution and war are about killing concepts that do us damage, the forces that many of us face every day when we go outside. We’re at war with white supremacy, sexism, homophobia, transphobia, ableism, and more.

So, if we understand history and the possibility of warfare in front of us, we’re required to respond. This means, yes, as many of us as are willing need to be prepared to learn about weapons and be prepared to use them to defend ourselves if or when it becomes necessary. But we have to understand security at every level and learn how to avoid and protect ourselves from every attack. Liberation begins in our communities: if we cannot protect them at the ground level, our work and our efforts will collapse. Masses of people do not need to be squeezed into one specific soldiering role: some people caretake, some cook, some organize, some clean, some make art, some teach, and so on. However, we do need many who are training and preparing consistently with whatever tools they have. The alternative is our demise. Unless we’ve given up, we have work to do.

Brick by Brick: Creating a World Without Prisons

The Practices We Need: metoo and Transformative Justice Part 2

Policing Has Failed For Real Public Safety, We Need A Million Community-Driven Experiments

Your Friend Has Been Abused: What Do You Do?