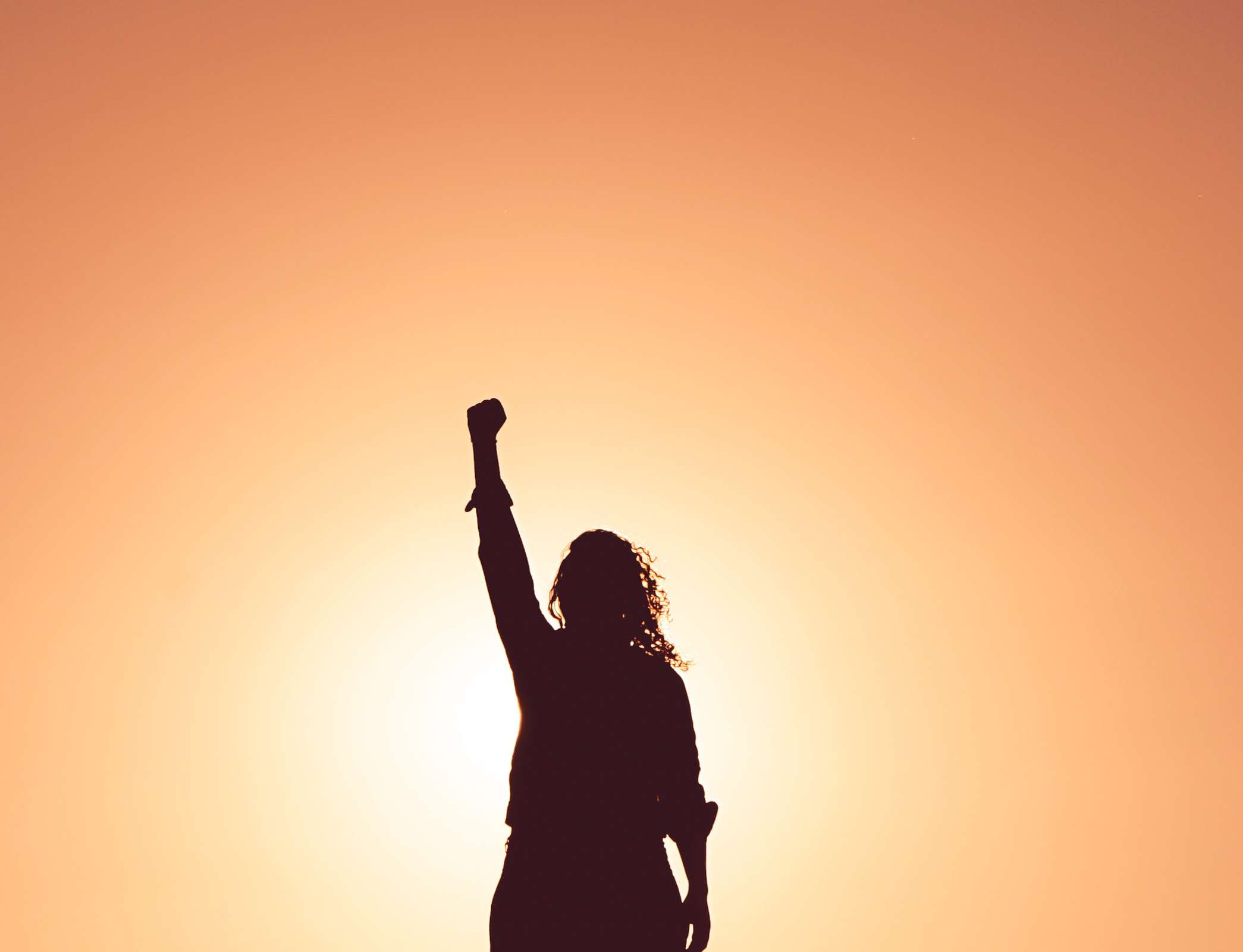 Emily Thuma’s new book, All Our Trials: Prisons, Policing, and the Feminist Fight to End Violence, presents a history of grassroots feminist organizing during the 1970s against gender violence and the carceral state. The following excerpt is from the introduction.

Washington, D.C.’s first-ever March to Stop Violence Against Women kicked off just after dusk on April 29, 1978. A boisterous crowd of roughly eight hundred people — diverse in age, race, class, gender, and sexual identity — snaked through the city’s adjacent neighborhoods of Adams-Morgan and Dupont Circle. The marchers carried flashlights, whistles, and handmade signs, and their chants articulated the event’s central message of “self-determination for women, power for women, [and] self-defense for women.” An extensive list of principles and demands drawn up by the organizers advocated “community sanction” for rape and abuse and solutions “involving empowerment of women, education of men, and community action” rather than “criminal justice.” The demonstration represented a coalitional effort between three organizations: the D.C. Rape Crisis Center; the Task Force on Abused Women of the Women’s Legal Defense Fund; and the “open-membership, action-oriented” D.C. Area Feminist Alliance. More than sixty other local groups endorsed the statement of principles and demands. The march was the culmination of the city’s first annual Anti-Rape Week, a community education project organized by the black feminist leadership of the Rape Crisis Center.

Once gathered at Dupont Circle Park, the demonstrators listened to an array of speakers and musicians. Among them was Linda Leaks, who delivered “revolutionary greetings” from Dessie Woods, a black woman serving a twenty-two-year prison sentence in the State of Georgia for killing an armed white man who had attempted to rape her and her friend. Leaks, a local member of Woods’s national defense committee, told the crowd that the incarcerated woman’s story belonged to a long legacy of white men’s sexual violence against black women that was rooted in chattel slavery. Just a month earlier, Rape Crisis Center staff members Deirdre Wright and Nkenge Touré had traveled to the Georgia Women’s Institute of Corrections to interview Woods as part of the center’s work to help disseminate her story and urge feminists and other progressive people to take action on her behalf. To the organizers of the march, Woods’s case, and others like it, exemplified the need for a feminist antiviolence agenda that took seriously the perilous entwinement of racism, classism, and sexism in the criminal legal system.

All Our Trials: Prisons, Policing, and the Feminist Fight to End Violence is a history of activism by, for, and about incarcerated domestic violence survivors, criminalized rape resisters, and dissident women prisoners in the 1970s and early 1980s. Across the United States, in and outside of prisons, grassroots women activists participated in collective actions that illuminated the interconnections between interpersonal violence against women and the racial and gender violence of policing and imprisonment. These mobilizations were spearheaded by radical women of color and antiracist white women, many of them lesbian-identified. They cultivated a distinctive left antiviolence politics that was defined by a critique of state violence; an understanding of race, gender, class, and sexuality as mutually constructed systems of power and meaning; and a practice of coalition-based organizing. This book traces the political activities and ideas that constituted this anticarceral feminism and demonstrates that it shaped broader debates about the root causes of and remedies for violence against women. It also reveals the important role of this activist current in the making of a prison abolition movement in the 1970s.

Anticarceral feminist politics grew in the cracks of prison walls and at the interfaces between numerous social movements, including those for racial and economic justice, prisoners’ and psychiatric patients’ rights, and gender and sexual liberation. Through the process of building coalitions that transected these social justice struggles, the activists at the center of this study produced a broad and layered understanding of “violence against women” that encompassed the structural violence of social inequalities, the violence of state institutions and agents, and interpersonal forms of violence, including rape, battering, and sexual coercion. This expansive analysis directly clashed with the “tough-on-crime” ethos of the 1970s and the mainstream women’s movement’s increasing embrace of criminalization as a frontline solution to interpersonal violence. As this history demonstrates, violence against women was — as it still is — a highly charged political claim rather than a transparent descriptor, and the ascendency of a law-and-order feminism was a deeply contested process.

All Our Trials tells a story of resistance to violent policing and state repression of gender and sexual deviance and nonconformity. The chapters chronicle a series of organizing efforts forged by, and in alliance with, women whose social locations and practices placed them beyond the pale of dominant notions of feminine respectability and state protection and in the way of state harm: those who were black, indigenous, Latina, immigrant, poor, gender and sexual outsiders, labeled crazy or mad, or involved in the sex trade. Feminist coalitions that foregrounded criminalized and incarcerated women produced new knowledges. They analyzed the interrelationship of state abandonment and state violence in communities of color, the entanglements of carceral and psychiatric power, and the racial constitution of gender and sexual norms and their brutal modes of enforcement in locked institutions. As the veteran black feminist organizer Linda Burnham reminds us, “the struggle for social transformation [is] a powerful generator of theoretical insight,” as it affords opportunities for “collective, mass-based inquiry.” Although this book focuses on activist formations and the theoretical understandings they engendered, it also documents numerous examples of individual marginalized women’s — particularly black women’s — bodily confrontations with institutional and interpersonal violence. From fighting back against a sexual attacker, to refusing to comply with a dehumanizing prison policy, to inscribing a testimony of personal violation in a radical prison newspaper, these everyday acts of survival helped constitute anticarceral feminist thought and practice.

This book, then, aims to offer a history of the carceral state from below. It recovers the political and theoretical contributions of grassroots activists who enacted solidarities across prison walls and seemingly discrete trials and struggles in their attempts to envision and create a violence-free world. As the following chapters convey, this work was often arduous, and its results were uneven and messy. With varying degrees of success, activists strove to build coalitions that recognized rather than obscured differences of social power among women and centered those most vulnerable to the brutal, and sometimes lethal, nexus of interpersonal and state violence. In doing so, they put an intersectional analysis of structures of inequality and domination into practice. Critical race theorist Kimberlé Crenshaw coined the term intersectionality in the late 1980s to theorize the imbrication of racial and gender inequality in black women’s lives and the incapacity of antidiscrimination law to address their multidimensional claims of employment discrimination. Yet, as scholars and activists have pointed out, the larger theoretical insight that systems of racial, gender, economic, and sexual oppression are inextricably linked has a long and collective history that includes black feminist and women of color feminist political organizing in the 1960s and 1970s. All Our Trials demonstrates how antiviolence mobilizations that focused on the lives of marginalized women were generative of an interwoven analysis of racism, sexism, heterosexism, and capitalism that pointed to the carceral state as a source of further harm rather than safety and redress.

The Power of Circles

Freedom to Thrive: Reimagining Safety & Security in Our Communities

The Center for Popular Democracy