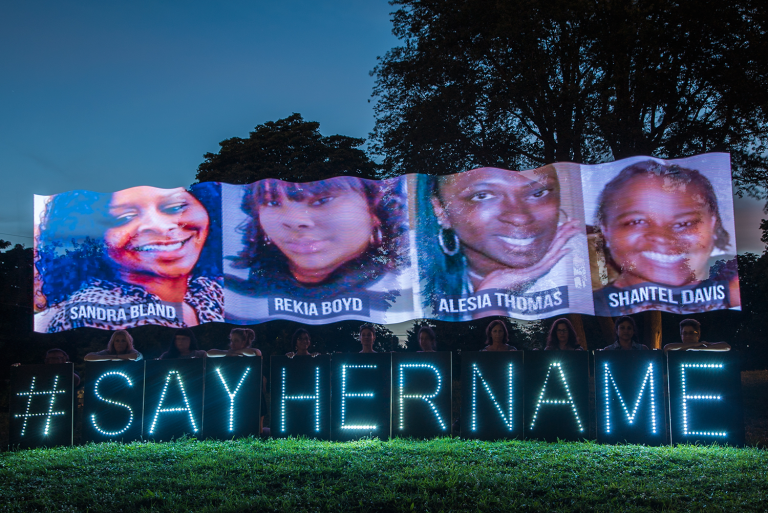 Communities Need to Reduce Violence Against Women of Color Without Police

Invisible No More is a timely examination of police violence against Black women, Indigenous women and other women of color. “Thanks to Andrea Ritchie’s thorough research and raw storytelling,” says Robin D.G. Kelley about the book, “we can finally begin to #SayHerName and end the state’s war on women of color once and for all.” Get a copy by donating to support Truthout now!

In the following excerpt from Invisible No More, Andrea J. Ritchie discusses how police often respond to complaints of violence by exacerbating violence against women of color, and the alternatives to calling the police that some anti-violence organizers have developed.

The Ann Arbor Alliance for Black Lives initially arose out of a solidarity march with Ferguson in the wake of the murder of Mike Brown in August 2014. Since then it has largely focused on demanding accountability for the killing of Aura Rain Rosser, an artist and mother of three killed by Ann Arbor police three months later. Officers David Ried and Mark Raab responded to a domestic violence call at Aura’s house. Claiming that Aura caused them to fear for their safety as she walked toward them from fifteen feet away holding a four-inch knife, officers made no effort to de-escalate the situation or give her an opportunity to drop the knife. Instead, five to ten seconds after arriving, they shot her. The officers and city officials retroactively justified the shooting by saying that Aura “opened her eyes very wide,” “appeared to be in a deranged state,” and had “a blank stare,” echoing the justifications offered by the officers who killed Michelle Cusseaux months earlier, and drawing on historic depictions of Black women as congenitally deranged, superhuman, and posing an inherent threat.

“A People’s Retort” to the prosecutor’s report in the case draws parallels between justifications offered for Aura’s shooting with Darren Wilson’s characterization of Mike Brown as a “demon,” using racist tropes to transform Aura into a mortal threat rather than a woman in the midst of “an angry dispute with her ex-boyfriend.” Local organizer and scholar-activist Austin McCoy notes the multiple dynamics at play in both Aura’s death and the state’s response: “The crucial difference is that Rosser is black and female. Being black and female in America today means that black women not only die at the hands of the state like men, their suffering is obscured while making their physicality and their psychological state hypervisible. Black women’s suffering is unseen by authorities, but the state tries to highlight how they are ‘aggressive’ and ‘hysterical.'”

The organizing around Aura’s case highlights a welcome expansion in the movement for police accountability compared to the relative silence around Cherae Williams’s case fifteen years earlier. Rosser’s image is one of many circulating in cyberspace under the Black Lives Matter hashtag, her death is the motivation for marches drawing thousands, her name is invoked alongside Brown’s at rallies, demonstrations, and vigils across the country.

When longtime antiviolence activist Mariame Kaba first read a New York Times article about Tiawanda Moore, she was shocked that she hadn’t known earlier about her case, which took place in Chicago, where Kaba was living. Kaba immediately mobilized the Chicago Task Force on Women and Girls to raise awareness about Tiawanda on social media, to campaign for since-deposed prosecutor Anita Alvarez to drop the charges, and to pack the courtroom with supporters throughout Tiawanda’s trial. Kaba never forgot the case, later playing a leadership role in the campaign to remove Alvarez as district attorney during the 2016 election under the hashtag #ByeAnita. Kaba’s organizing around Tiawanda’s case was consistent with Angela Davis’s call fifteen years earlier at the 2000 INCITE! conference: to recognize and organize from a place that makes visible survivors’ vulnerability to both state and interpersonal violence.

Survived and Punished, cofounded by Kaba, is among the organizations that have taken up the case of Ky Peterson, a Black trans man raped as he walked home from a convenience store in Americus, Georgia, in 2011. Ky defended himself, killing his attacker. Based on prior experiences, he didn’t think he would be believed by police, so he concealed the body and hoped for the best. His instincts were right — when police eventually did get involved, they didn’t see Ky as a victim, despite evidence from a rape kit that supported his version of events. Instead police pursued theories involving consensual sex and robbery that ultimately forced Ky to enter a guilty plea in an effort to avoid a lifetime of imprisonment. He was sentenced to twenty years. Chase Strangio of the ACLU concludes, “What this case highlights is how difficult it is for trans people of color to claim the status of victim.”

Beyond organizing around individual cases, these realities require us to acknowledge that racial profiling and police violence take place not just in street and traffic stops, but also when police respond to complaints of violence. Community efforts by anti-police brutality and antiviolence groups to document and redress violence should therefore explicitly include police violence that takes place in the context of responses to violence. Additionally, cop-watch groups need to support domestic-violence survivors in safely documenting their own experiences of policing and exposing police violence in these contexts.

Perhaps most importantly, Black women’s and women of color’s experiences of police responses to violence demand that we radically rethink our visions of safety, including by ending mandatory arrest policies and developing responses to violence that don’t involve the police. Some in the mainstream antiviolence movement have already started down this road. In March 2016, I found myself, to my great surprise, at a gathering convened by the federal Office of Juvenile Justice, Detention, and Prevention to discuss ending mandatory arrest policies in the context of responses to family violence involving girls, which are among the primary drivers of girls’ arrest and incarceration. Perhaps if this had been achieved in Kentucky, Gynnya McMillen, who died in custody after being arrested following a dispute with her mother, would still be with us today. In June 2016, the New York City Council Young Women’s Initiative recommended the establishment of a task force to consider the repeal of mandatory arrest policies in one of the first cities that adopted them. The initiative also advocated for programs that would empower women to prevent, avoid, and leave violence, including increased access to housing, employment, and health care, and legalizing their immigration status. By investing in the needs of communities and survivors, the goal is to reduce police responses to violence and support alternative approaches to advancing safety of young women and girls.

Some organizations have been laying the groundwork for community-based responses to violence: Communities Against Rape and Abuse and Sista II Sista both wrote powerful pieces in Color of Violence: The INCITE! Anthologydetailing their experiments. Creative Interventions, Gen 5, Harm Free Zones, and the Audre Lorde Project Safe Outside the System Project have all piloted, practiced, and reflected on how we respond to violence without police. Many of the lessons learned are highlighted in the Creative Interventions’ Toolkit: A Practical Guide to Stop Interpersonal Violence, inspiring newer formations, like the Dream Defenders, and others to follow in their footsteps. Ultimately, the experiences described in this chapter, along with countless others, counsel strongly in favor of a critical examination of current approaches to violence against women, and the development and support of alternative, community-based accountability strategies that prioritize safety for survivors; community responsibility for creating, enabling, and eliminating the climates that allow violence to happen; and the transformation of private and public relations of power.

The Critical Resistance-INCITE! statement calls on movements concerned with ending police violence and violence against women to “develop community based responses to violence that do not rely on the criminal legal system AND which have mechanisms that ensure safety and accountability for survivors of domestic and sexual violence.” Such responses are essential if we are to move away from reliance on law enforcement — based approaches to violence; achieve true safety for survivors of domestic violence; and, ultimately, end violence against women of color in all its forms.

Copyright (2017) by Andrea J. Ritchie. Not to reprinted without permission of the publisher, Beacon Press.

Previous Challenging Men, Changing Communities: Reflections on Male Supremacy and Transformative Justice Next What Would it Take to Actually End Intimate Violence?