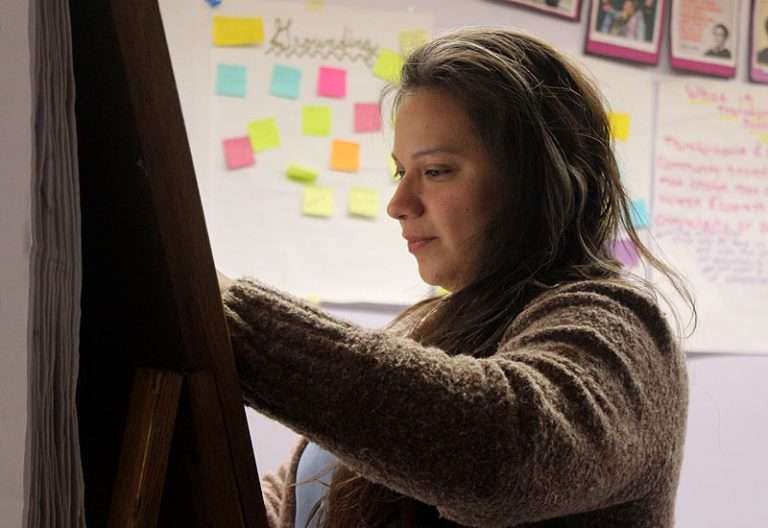 For Tasha Amezcua, Safety Starts by Not Calling the Cops

BROOKLYN, New York (WOMENSENEWS)— Tasha Amezcua identifies herself as a "queer, femme, Chicana survivor of violence . . . who has never relied on the police for safety."

That identity is integral to her work as program coordinator of the Safe OUTside the System Collective at the Audre Lorde Project, an organization based in Brooklyn, N.Y., that works with queer and trans people of color to foster community wellness, as well as social and economic justice.

The collective is an anti-violence program that encourages people to turn to their communities — instead of to the police — when confronted with crisis situations.

In a recent interview at the Audre Lorde Project’s Brooklyn office, Amezcua discussed the ways in which queer and trans women and femmes of color are policed, and how different organizations have presented alternatives to policing over the years. Some questions and answers have been edited.

1. What are the central concerns of the collective?

The SOS Collective builds safety strategies that do not rely on the state. So it’s about how do we take care of each other? How do we undo and transform the root causes of the oppression that we face without ever counting on the police to take care of us or to keep us safe? How do we build wellness, wholeness and safety rooted in our community knowledge, in our ancestral knowledge, that also undoes the roots of white supremacy, misogyny, capitalism???

2. How do you foster safety without calling in the police?

What we do in reality is that we build skills together. We try to center our politic in transformative justice and reject disposability and criminalization. We try to learn and build skills so that when we experience trauma or scarcity, instead of turning away from each other or turning on each other, we turn into each other. So it’s not just "don’t call the cops." It’s "don’t call the cops, call each other." Investing in our wellness means to do an act of abolition because the system is bent on killing us.

I’m a survivor of violence and the people who have caused me harm are also people that I love and who experience criminalization more than I do. I never wanted someone to be locked up or to lose liberty. I wanted harm and violence to stop and I love those people so much that I wanted to love them down until they wouldn’t harm anymore. What that has looked like for me has been a lot of trial and error and trying to figure out how to heal myself and my community. Often, it’s naming truths. What does it mean to be vulnerable and try to heal? People who are survivors of violence are often blamed. How do we pull that power together of "actually, we made it"? I’m standing right here. I must have done something right.

3. Could you comment on the ways in which queer and trans women and femmes of color are policed?

Also, when trans femmes have been incarcerated and asked to be in solitary, there have been times where they’ve been chained to benches or to a toilet for hours on end to keep them "safe," which is actually torturous.

So I think misogyny is an inherent part of the policing of femmes of color generally . . . I think the way that whiteness has intersected with indigenous and black femininity since the founding of this country is often through rape. I think that is continued in the way that police police.

4. In 2006, a group of black lesbian women were arrested in Greenwich Village after allegedly attacking a straight black man. The women — as well as a couple of bystanders — said that the man had sexually harassed them, but four of them were charged and ultimately became known as the New Jersey Four. The Audre Lorde Project, as you’ve said, worked with the NJ4. In the decade since that incident, to your knowledge, have there been any significant changes in policy?

I guess in terms of policy or legislation that’s been beneficial to the community, right now Communities United for Police Reform — Streetwise and Safe is a part of it, FIERCE is a part of it, ALP, CAAAV: Organizing Asian Communities, they’re all a part of CPR, and CPR has created and pushed legislation right now for cops to have to identify themselves as police officers when they’re making a stop and just say their badge number and their name and stuff if the person asks. I think that’s really important because that means more accountability from cops.

Another policy folks were trying to push was a No Condoms as Evidence campaignthat also came out of CPR. Let’s say a police officer profiles a queer or trans person of color as a sex worker and then they stop and frisk them and then they find condoms on them. They can use those condoms as evidence of prostitution or the intent to solicit, and this has happened multiple times and they have been used as evidence in court. CPR has asked the police to write a policy so that that practice is banned.

5. What are some ways to improve the safety of queer and trans people of color, specifically women of color and femmes of color, who face a disproportionate amount of police violence?

They shouldn’t be privatizing the piers or doing quality-of-life policing in the West Village.

A couple of years ago, there was a murder in the West Village: A man shot a gay black man in the head inside a West Village bar. Instead of going to community members and asking "what can we do to increase safety for folks in community?" the response of the city council was to increase police presence in the West Village, which only again served to criminalize queer and trans youth of color, so we need a decrease in quality-of-life policing.

So I guess we would need folks to interact and interface with the City Council, build relationships with them, make sure that when violence happens in these kinds of ways, instead of turning to the cops they’re turning to community and asking "what do you need to feel safe?"

Also, for folks who are trying to protect their investments and real estate in the West Village: Rich white people shouldn’t get to dictate who has access to historically queer and trans people of color neighborhoods and the piers being privatized, closed and policed.

6. Are things getting better or worse?

But at the same time, I think that our movements, to come up against these forms of violence, have increased in capacity and ability. We have more folks than ever and we have more skill than ever and we’re mainstreaming these conversations. I used to have to convince people that police were violent. I don’t have to start there anymore. Everyone agrees with that and that is one cultural shift that I’ve seen. I think institutional shifts are informed by cultural practice and values and I think our values have started to shift.

I think ultimately it’s about how do we abolish the state at the same time that we reduce the harm that the state has already caused to people who are in its cages. So as much as I want to destroy the cage there’s somebody already in it is asking for a more comfortable cage. How do we do both of those things at the same time?