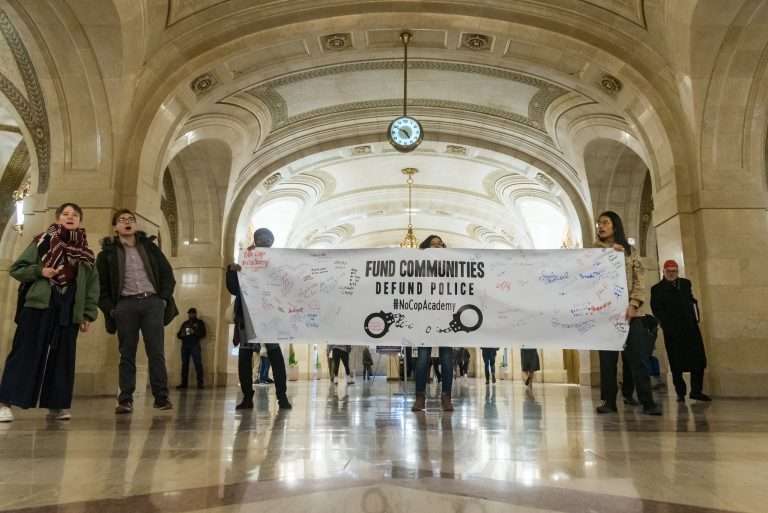 How #NoCopAcademy shook the machine

How #NoCopAcademy shook the machine

The coalition lost the vote but changed the narrative on police spending.

On March 13, Chicago's City Council voted 38 to 8, with two abstentions, to approve a contract with mega-construction company AECOM for building an $85 million police and fire training facility in the west side neighborhood of Garfield Park. The vote came at the end of an 18-month campaign, initiated by a coalition ultimately supported by over 100 local grassroots organizations, called #NoCopAcademy.

Directed by a core of Black youth, the multiracial, multigenerational cohort of researchers, organizers, educators, and artists united disparate demographics, far-flung neighborhoods, and diverse political ideologies in the demand that the city not further increase spending on its police department—which is already per capita one of the most well-funded in the nation—and instead repurpose those funds for resources that prevent violence, like high-quality public schools, affordable housing, and mental health care.

The #NoCopAcademy coalition failed to halt the city's plans to pass the academy's contract. But, like any grassroots campaign, the immediate call-to-action is only half the battle, and only half of how we assess victory. It is as important to take inventory of #NoCopAcademy's long-term success as it is its short-term losses.

#NoCopAcademy centered the voices of those most impacted by our city's cuts to education and hyperspending on mass incarceration—Black and brown young people. Youth from the south and west sides, many of them Austin and West Garfield Park residents, hosted weekly meetings, wrote public statements, held press conferences, led train takeovers, attended trainings and workshops, organized die-ins—all with the purpose of determining their own messaging and distilling their own values. Dozens of teenagers developed into experienced organizers over the course of the year-and-a-half-long struggle, and were the backbone and unapologetic voice of the campaign. These youth are well-trained, fired up, and poised to take on new battles in their respective corners of Chicago.

The multiracial and multigenerational coalition brought together organizations that are often siloed in Chicago organizing. Communities that rarely interact—and have even historically been at odds—not only recognized the danger of the academy's imminent construction, but the need to connect their struggles to resist it. From Muslim youth's disruption of Rahm Emanuel's Iftar dinner, to Black leaders joining Organized Communities Against Deportations to head the #ChingaLaMigra march in the Loop. From queer Asian organization Invisible 2 Invincible bringing a #NoCopAcademy contingent to the Lunar New Year Parade, to young people from the south and west sides marching in Uptownagainst 46th Ward alderman James Cappleman, chair of the zoning committee, and uniting in the fight against school closings across Black neighborhoods. On the day of the budget committee's final vote on the academy, members of Raise Your Hand IL and the Chicago Teachers Union linked arms with Black and brown youth to block elevators at City Hall, while west siders from Black Workers Matter spoke out against the misuse of TIF funds meant for their communities.

One hundred and five organizations from across the city stood together to state their support for the defunding of police and the increased funding of social services. Most didn't merely offer symbolic endorsements, but drew on their membership to throw down and speak up on behalf of the demands of youth organizers. This alone is a massive shift, and a monumental political achievement.

#NoCopAcademy also developed new tactics to fight the machine. Organizers canvassed 500 Garfield Park residents, then released a report demonstrating the lack of support for the academy and outlining the kinds of investments wanted in the neighborhood. When Black youth were barred from comment at public hearings, they sued the city and won a settlement, forcing 34th Ward alderman Carrie Austin, chair of the budget committee, to hold public comment at the next committee vote. They petitioned for government documents, and researched the flow of private money into aldermanic pockets. They led workshops for organizers and communities, educating many for the first time on the contours of local politics.

After a rare defer-and-publish maneuver delayed a vote on partial funding for the Cop Academy, Rahm Emanuel taunted organizers, telling the Sun-Times,"Between today and Friday . . . there's not gonna be a vote change." By the end of the campaign, 12 different aldermen abstained, deferred, or flat-out voted against at least one of the proposals for the academy—a stunning 24 percent of City Council—and both candidates in the mayoral runoff opposed aspects of the project. #NoCopAcademy studied the machine and shook it thoroughly without playing by its rules.

Chicago organizers who have led the national conversation on abolishing police and prisons can attest that the message of abolition has long been deemed too radical for mainstream political discussions—even those facilitated by the left. A deep-seated belief in the indispensability of carceral institutions, and concerns about what would replace them, have regularly drowned out the voices of communities with clear answers to these quandaries.

By jumping on the construction of the academy and highlighting the city's hypocritical claims of being "broke" when it closed half its mental health clinics and 49 public schools only years prior, #NoCopAcademy provided a concrete example of the abolitionist politic in action, asking: Why can't Chicago find money to heal and educate our communities, yet can always find money to police and incarcerate them? What if we reversed the spending flow, divesting from the failed institution of policing, and investing in the support systems that can prevent crime and violence in the first place?

#NoCopAcademy helped illustrate abolition as common sense, and was a litmus test for "progressive" candidates' true values. It challenged mainstream journalistic practices—which treat policing, education, and housing as separate conversations—demonstrating that a holistic approach to social and economic justice is the only answer to ending systemic violence. Multiple aldermanic races were won by candidates explicitly supporting #NoCopAcademy, a significant shift from just four years earlier when even progressive mayoral candidate Chuy Garcia ran on a platform of 1,000 more cops.

There are more battles ahead before the city can complete its plans for this hugely unpopular project. The academy has yet to be built. AECOM, the contracted company, has a lengthy history of overspending and defrauding governments. Temporary construction jobs promised by Alderman Emma Mitts to West Garfield Park residents have yet to materialize. But more importantly, the deep bonds built by this broad coalition are also prepared to support entirely new campaigns in a new Chicago.

With a total of five incoming aldermen who are Democratic Socialists of America­ endorsed, the City Council arriving in May will look drastically different than the ones preceding it. And as battles for rent control, cops out of schools, and an emerging effort to stop Rahm Emanuel and his successor Lori Lightfoot from converting closed schools into police training facilities all begin to take shape, the city is facing a more mobilized and united front opposing plans for militarization and displacement.

#NoCopAcademy lost the final vote but changed the narrative on police spending and building long-term community safety. In so doing, they also won the hearts and minds of thousands who previously might have never imagined themselves fighting for the defunding of a corrupt, disgraced, and death-making institution.   v

Benji Hart is an author, artist, and educator living in Chicago, and an organizer with the #NoCopAcademy campaign.

Previous Is Prison Necessary? Ruth Wilson Gilmore Might Change Your Mind Next The political whiteness of #MeToo