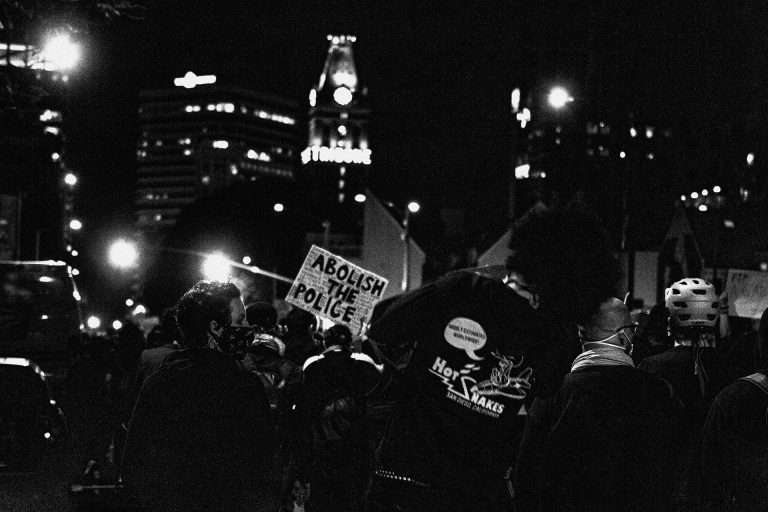 If We Abolish Police, What Happens to Rapists?

In this op-ed, Cassandra Mensah explains what happens to rapists and abusers if we abolish police.

The Movement for Black Lives’ call to defund the police is reaching more people than ever before. In an unprecedented move, Minneapolis city council announced its commitment on June 7, 2020 to disband its police force and invest in community-led safety models.

While the idea is becoming more widespread, people who are new to the idea to defund and abolish the police are pushing back with the age old question: “If we abolish police, what do we do about the rapists and abusers?”

Historically, legislators have uplifted pro-incarceration survivors of violence to promote bills that are ‘tough on crime’ despite their inability to reduce overall crime rates. It is a tactic that seeks to silence abolitionists by suggesting they are invalidating feminist movements (even though many abolitionists are in fact survivors themselves).

I am a Black attorney who represents survivors of domestic violence in New York courts. I am a survivor of sexual violence. I cannot and will not speak for all survivors. This is my response to the ‘but what about the rapists?’ question. It’s a starting point, and hopefully, a humble reminder that while some may be grappling with abolition for the first time, the aim to keep each other safe without the police and prisons is one that communities of color and Indigenous communists have been working toward for centuries.

What about the rapists? The path from reporting a sexual assault to incarcerating a perpetrator is incredibly long and uncertain. The survivor must retell their experience of violence over and over again to complete strangers who often ask victim-blaming and re-traumatizing questions. If and when the state brings charges against the perpetrator, the survivor loses agency in the process. It is not the survivor's case. It is the state versus the perpetrator and the survivor is only a witness. In some jurisdictions, survivors can face prosecution if they refuse to testify. According to RAINN, for every 1000 sexual assaults, about 230 of those are reported. Of the 230 reported cases, fewer than 5 result in incarceration.

So the short answer is: most rapists do not end up in prisons anyway.

A non-abolitionist response to these statistics would be to simply push for more incarceration. I encourage us to think holistically and more creatively. The criminal system leaves many survivors traumatized by a process that does not give them what they need. The focus on convictions minimizes the reality that many survivors need financial resources to permanently leave violent households. While it's true that some survivors want their attacker imprisoned, others want access to mental health services. Many survivors want the perpetrator to admit their wrongdoing. In a criminal context, perpetrators cannot admit to wrongdoing without confessing to a crime and so have no incentive to do so. The criminal system is not designed to create survivor-centered responses to violence, to promote agency and healing in survivors, nor does it demand behavior change in the perpetrator. Like most white supremacist institutions, it is only designed to punish.

If the long term goal is to end sexual and domestic violence, and to provide survivors with what they need to thrive, increased incarceration will not get us there.

CultureIn addition to perpetuating violence in their homes, police frequently commit acts of sexual violence against civilians. A 2015 study found that, over a 10 year period, an officer was caught in a case of sexual misconduct every five days. Not all states prohibit cops from having sex with people they detain. Where such laws do not exist, officers can avoid liability by claiming the sexual act with a civilian was consensual. Some officers coerce street-based sex workers into performing sexual acts to avoid arrest. Relying on law enforcement to respond to sexual violence ignores the reality that many cops are perpetrators of such violence.

I know that sometimes, calling the police can be an effective tool to stop immediate acts of domestic violence. I also know, however, that many survivors want the violence to stop but do not want their partner to be shot by the police in the process. This puts some Black and brown survivors of violence, whose perpetrators are also Black and brown, in an incredibly difficult position. In fact, a study of 1,124 police cases found that Black survivors were 98% more likely to die prematurely, primarily of heart disease that study authors hypothesize could be related to chronic stress if their partner was arrested instead of given a police warning. Importantly, homicide rates among these survivors were the same, regardless of whether their partner was arrested or given a police warning. Survivors should not have to roll the dice and hope the police will not escalate the violence or sexually harass them.

What if calling for assistance did not include such high risks? What if experts in de-escalation and safety-planning arrived unarmed and intervened instead? By defunding the police, we can redistribute those funds to alternative responses that do not put survivors at risk of further harm by the state.

Prisons are sites of violence

The call to defund the police inevitably and necessarily demands an abolishment of prisons. If we are serious about ending sexual and domestic violence, then we cannot rely on prisons to do so, as they too, perpetuate harm.

Prisons house a community of survivors that the criminal justice anti-sexual violence movement historically and systemically ignores: criminalized survivors. According to “Survived and Punished,” criminalized survivors are those punished by the legal system for their survival strategies such as “self-defense, failure to protect, migration, removing children from abusive people, being coerced into acting as an ‘accomplice’ and securing resources needed to live.” Nearly 60% of people in women’s prisons in America and up to 90% of people in juvenile detention have experienced some form of trauma. What if we could keep survivors safe without criminalizing their survival tactics?

When we incarcerate people, we make them invisible. Regardless of their experiences of harm in the past, the label ‘criminal’ allows us to ignore the harm behind bars. Unsurprisingly, sexual violence is rampant in women’s prisons, and reports are on the rise. Corrections officers harass incarcerated people as they shower, sexually assault them in their cells, and subject them to invasive strip searches. Men’s prisons are also sites of sexual violence, and yet, TV shows and movies frequently depict sexual violence against inmates as a joke or, as glorified retribution. Trans and nonbinary people are placed in the prison that matches the sex assigned to them at birth, putting them at tremendous risk of violence at the hands of other incarcerated people and corrections officers.

If the aim is to end sexual violence, how could we condone a system that normalizes it as a form of punishment? What if we could remove perpetrators of harm from the home, keep a survivor safe, and not put the perpetrator in a cage where they are likely to experience sexual, physical, and emotional violence?

Toward a violent free future

I know some survivors navigate the criminal system and receive the justice they seek. Survivors deserve to be safe and validated. They are entitled to the rage they feel for their perpetrators. But we cannot settle for a system that causes more harm and leaves many survivors behind. A movement that centers affluent, straight, cis, femme, and white survivors is one that inherently upholds white supremacy. I am dedicated to an anti-sexual and anti-domestic violence movement that does not uphold other forms of state sanctioned violence.

A criminal justice system designed to uphold white supremacy cannot adequately address the needs of marginalized survivors. A call to defund the police is an opportunity to have experts intervene before the violence is lethal. It is an opportunity to increase funding for sex-education in schools. It is an opportunity to create tailored responses to violence that promote safety, agency, and healing in the survivor, and real consequences and behavior change in the perpetrator. An inherently violent police state has not and cannot end intimate partner violence for good. In the words of Mariame Kaba, prisons are not feminist.

Previous 8 to Abolition Is Advocating to Abolish Police to Keep Us All Safe Next What About the Rapists and Murderers?