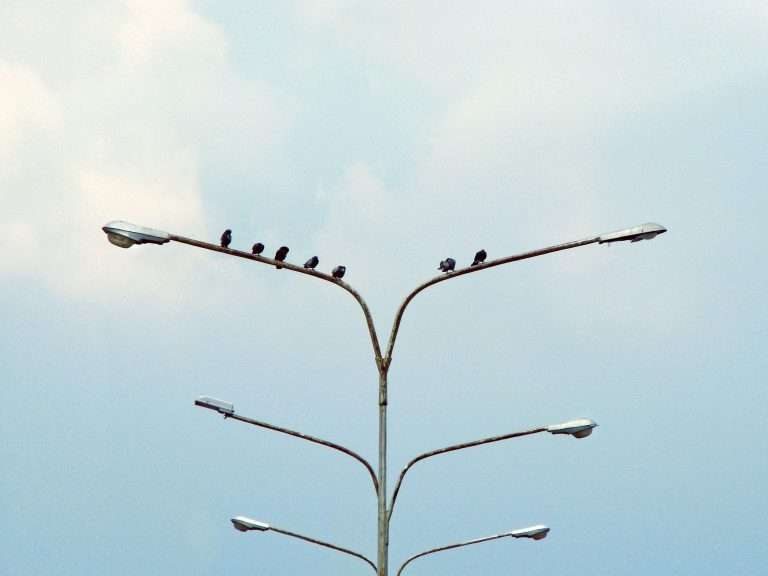 The August 2016 announcement by the Obama administration that it will phase out or “substantially reduce” contracts with private prisons to house federal prisoners provides a master lesson in the political benefit of the magician’s art of misdirection.

Hailed by many as a definitive step forward in criminal justice reform and a severe blow to the continuation of mass incarceration, the focus on private prisons hides more than it reveals. It raises false hopes, offers false promises, and points many who want transformative change in the wrong direction.

It’s not that President Obama is insincere or that it’s wrong to curse the existence of and work to end private prisons. I’m thrilled when one of those greedy little profit mills, whose accountability is only to shareholders, closes; it’s possible that every time one does, an angel gets its wings.

But for years I’ve been writing (often in collaboration with sociologist Nancy A. Heitzeg) about the deployment of the magicians’ and carnival barkers’ arts in framing discussion about “reform.”

“Misdirection” is the practice of controlling attention so people don’t see what you don’t want them to see, but see only the things that promote your particular storyline. A storyline that, while reductive, simplistic, and way too easy, is nonetheless, for those very reasons, attractive, reassuring, and popular.

There is, however, is a persistent, popular, and misguided belief that they do; that they are a major drivers of mass incarceration.

Peter Wagner of Prison Policy Initiative (PPI) makes it clear that private prisons are a late feature of the US carceral complex and do not drive mass incarceration; rather, as scholar and prison abolitionist Ruth Wilson Gilmore says, they feed parasitically on the public prison system. The foundation for the U.S. incarceration nightmare is that public system, not private prisons. The growth of private prison companies has always, PPI says, trailed the growth of publicly owned prisons.

Look at the chart from Prison Policy Initiative that accompanies this discussion to get a better sense of the scope of incarceration in the US.  In 2016, more than 2.3 million people reside in what PPI calls “disparate systems of confinement.”

Only a very small number of people confined in this carceral archipelago will be affected by the Obama administration’s announcement because it affects only privately-run federal “contract” prisons under the aegis of the Department of Justice/Federal Bureau of Prisons. Remember: this is a phase-out, over time. Out of about 195,000 prisoners in facilities overseen by the Department of Justice, that translates into 22,00 prisoners in thirteen locations who will be relocated to facilities run by the Federal Bureau of Prisons. But that’s not the whole federal picture. The DOJ announcement does not include federal detention under the aegis of the Department of Homeland Security or the US Marshals Service.

In the wake of the DOJ announcement, the Department of Homeland Security announced a forthcoming review of its contracts with private facilities that house the majority of people detained by Immigration and Custom Enforcement (ICE). About 400,000 people move through the system annually, though they aren’t all detained at the same time. Currently, a Congressional “detention bed quota” mandates the incarceration of 34,000 immigrants at any given time. More than half of these detainees are in private contract facilities. Many more are detained in local public jails that contract with the federal government to provide beds.

And most private prisons operate under state, not federal, contracts.

The focus on private detention facilities does not help the public better understand the complexity, magnitude, and severity of community/societal impacts of this nation’s carceral catastrophe—or the prison industrial complex that facilitates it. It does not undo the Congressional detention quota. It fails to address how federal contracting with local authorities buttresses county correctional budgets. The 2016 DOJ decision may not produce all that it seems to promise: there’s lots of wiggle room for reconsideration or reductions rather than contract termination.

Finally, the DOJ decision, and any possible similar announcements by other federal agencies, can be undone in an instant by a new decision—from the sitting or a successor president.

In the wake of the DOJ announcement, a frenzy of social media posts gleefully noted an immediate and substantial drop in the stock value of the two major private prison companies, Corrections Corporation of America (CCA) and The Geo Group, Inc.

The same social media networks were largely silent as stocks quickly began to rebound amid a flurry of corporate reassurances to investors  (also here and here). In fact, the same day that DOJ was making its announcement, The GEO Group announced a contract renewal/extension for a private correctional facility with the Federal Bureau of Prisons.

And there’s more. Always seeking new markets in which to expand and anticipating the dubious fruit of much “bipartisan criminal justice reform,” these and other carceral profiteers have already been moving into the lucrative world of  “community corrections” and “re-entry services.” An entire “treatment industrial complex” has come into being and is expanding as more people are swept into the system without actually being imprisoned.

It’s a sweet sleight-of-hand: under the rubric of decarceration, many people are channeled into profit-producing “alternatives.” Who wouldn’t rather be outside rather than inside prison walls? Reformers say this saves taxpayer dollars. But in fact, many of those taxpayer dollars are simply going directly into corporate hands. Reformers promise “justice reinvestment” in communities, but nowhere do we see saved incarceration dollars substantially supporting public education, health care, food and nutrition programs, essential civic infrastructure, and other essential human needs. To the contrary: such public expenditures are being slashed.

And in many cases, the costs of so-called “community alternatives” are being shifted directly onto the same people who otherwise would be incarcerated. A Virginia-based bail bond company, for example, helps immigrants get out of ICE detention by making those same people pay exorbitant monthly fees for electronic monitoring ankle bracelets as a condition for bond.

Whether looking at the role of cheap (coerced) prison labor, contracts for health care and food services, the provision of correctional and surveillance technologies, or profit-oriented “alternatives to incarceration,” we must understand that the problem is first and foremost with the public system. Rather than investing in human needs, good jobs, infrastructure, and services, the US has chosen carceral control as its approach to structural inequalities and social problems. And this mindset has entered virtually every aspect of our fear-driven society. Scholars Rose M. Brewer and Nancy A. Heitzeg put it plainly: “[T]he prison industrial complex is a self-perpetuating machine” where the vast profits and political benefits lead to policies that “are additionally designed to ensure an endless supply of ‘clients’ for the criminal justice system…”

3. Safety and security in the prison system are just as horrific in public as in private prisons.

The DOJ announcement drew on a report by the federal Inspector General asserting that private prison facilities were less safe and effective than those run by the Federal Bureau of Prisons.

Less safe and effective for whom?

The DOJ announcement gives the impression that both prisoners and the the public at large will be safer with more prisoners in publicly-owned and operated facilities. But the prison system is inherently violent, no matter who runs individual facilities. The systemic violence, degradation, and inhumanity of America’s constitute a historically resonant and ongoing American horror story.

Within both public and private prisons, sexual violence  is commonplace, more often committed by guards and other staff than inmates, and laws have done little to eliminate it. Substandard and negligent health care is common in immigrant detention. The widespread use of long-term solitary confinement in state and federal prisons, both public and private is, in effect as well as international law, torture.

The design and regimen of the nation’s maximum security prisons and units, both federal and state, rely on lockdown in tiny, blank spaces in which, prisoners feel they have been  buried alive.

And this month—September 2016—at the 75th anniversary of the Attica uprising, we are witness to an unprecedented, prisoner-coordinated strike/work stoppage in forty (or more) sites across twenty-four states. It is centered around forced and exploitative prison labor—slave labor by prisoners is permitted by the Thirteenth Amendment to the U.S. Constitution—and protest against inhumane conditions. Thousands of prisoners are involved. But prison authorities don’t want the news—or the scope—of the strike made public; it is largely being ignored.

4. The “Private Prisons” focus promises to help end mass incarceration without having to structurally change the system.

It’s characteristic of the current wave of criminal justice reforms to suggest that we can eliminate mass incarceration and its many impacts without actually addressing structural racism, poverty, and gender and disability-based violence. Reform talking points often evoke incarceration’s profound racial bias, and sometimes that of class, vaguely assuring us that these things will eventually vanish in the light of reform. But nobody is clear about how, exactly, that will happen.

Dan Berger says that prisons “index inequality.” True. It doesn’t matter whether they’re public or private. In a society where the norms are white supremacist, class-bound, and heteropatriarchal, it’s no surprise that people of color, particularly Black, Latino, and Indigenous people, are wildly overrepresented in prison systems. Or that prisons serve as institutional collectors for so many poor people; for people with mental illness and cognitive disabilities; for transgender and gender nonconformingpeople. Or that with just five percent of the world’s female population, the United States accounts for nearly thirty percent of the world’s incarcerated women.

We should be addressing that, but…

5. A focus on private prisons draws us away from structural questions.

And in doing so, it diverts attention away from the need for a more strategic—in Ruth Wilson Gilmore’s words—“structural analysis for action.”

A “bipartisan criminal justice reform” industry has arisen, operating within the existing logic and structures of the prison industrial complex. Many of the same political and economic players who helped accelerate mass incarceration want us to trust them to take care of the problems, which are usually cast as “saving money by reducing the incarceration budget” and tackling the problem of “over-criminalization.” Mainstream political discussion of criminal justice reform today—a discourse fueled and dominated by the Right—erases the possibility for that necessary structural analysis for action.

Says Gilmore: “Opportunists beguile audiences and divert attention and resources from people and organizations that have been fighting for decades to change the foundations on which mass incarceration has been built: structural racism, structural poverty, and capitalism devouring the planet. And they succeed in part because it has become unhip to subject the decisions, rhetoric, and goals of reform campaigns to any kind of thoughtful scrutiny.” 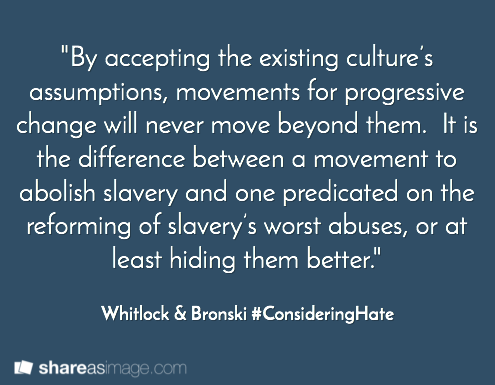 Is there a better direction in which to move?

What if our understanding of justice weren’t so circumscribed by the image and reality of the prison? What if new justice goals rendered prisons obsolete? What if we moved carefully, strategically, step by step in that direction?

For now, I will simply leave you with this:

Previous Mama’s Bailout Day and Other Bottom-Up Interventions in Everyday Justice Next Think prison abolition in America is impossible? It once felt inevitable