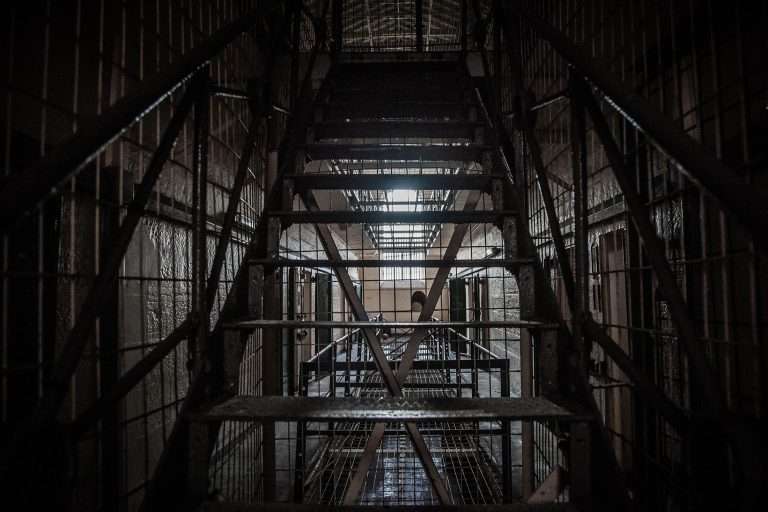 When emancipation came—a slow, agonizing unraveling that dragged out over the course of a war that snuffed out some 750,000 lives—nearly 4 million enslaved blacks were liberated from what powerful men had declared was their “natural and normal condition.” After generations had been told slavery was as immovable as the stars, that “cornerstone” of a would-be empire was dynamited.

The 13th amendment granting their freedom, however, contained a now-infamous exception. Slavery and involuntary servitude would be abolished “except as a punishment for crime whereof the party shall have been duly convicted.” That is, slavery was out. Unless, of course, the shackled party was someone the law deemed deserving of shackles.

More than 150 years later, a movement to abolish prisons and the vast system of confinement they represent is pulling in larger and larger audiences as public opinion toward America’s criminal justice system has drifted in more progressive directions in recent years.

The prison abolitionist tradition is as old as prisons themselves. The goal, in one sense, is exactly what it sounds like: to uproot prisons from the American landscape. Not to merely change prisons for the better, but to make them unnecessary in the first place. That’s because for the abolitionist, prisons are a clear symbol of an unjust social system, and unjust social systems should be overthrown and replaced. We could, for instance, easily end the pain of poverty, homelessness, lack of healthcare and joblessness. But instead, we let them persist and then cage people for acting on the desperation those things predictably unleash.

Poor black communities know this better than any other. The racist absurdities of incarceration in the United States are widely known. Radley Balko of The Washington Post was kind enough to gather a wealth of research on the topic in one place. It reveals a clear and disturbing picture of the criminal justice system as an always-looming presence over poor black lives, often cannibalizing whole communities in its path.

Where a well-meaning person may look at that system and see a machine that badly needs repair, the black community sees one running with shattering efficiency.

Like any popular movement, prison abolition work is taking place in communities across the country at the hands of untold numbers of dedicated activists, organizers and volunteers. But it’ll come as no great shock that some of its most potent voices have sprung from poor and working-class black communities. Across the country, black-led organizations like Critical Resistance, Black and Pink, Florida-based Dream Defenders, and Chicago-based Assata’s Daughters, are but a handful of stars in a large constellation of them.

“Communities that experience higher rates of violence and crime tend to experience increased policing,” says Kamau Walton, a member organizer with Critical Resistance, an abolitionist organization founded some twenty years ago in California’s Bay Area. And while there’s nothing inevitable about the conclusions one will draw from that experience, black folks tend to “have a much more clear understanding of the impacts of policing.” Where a well-meaning person may look at that system and see a machine that badly needs repair, the black community sees one running with shattering efficiency.

Page May, co-founder of Assata’s Daughters, a Chicago-based grassroots “collective of radical Black women” sketches a clear line through time, linking the horrors of slavery and Jim Crow to the conditions faced by incarcerated people today. “For a lot of black people, we recognize it for what it is,” she states plainly. “This isn't a failure of design,” but “a very beautifully designed system of anti-blackness. That thread of history—that’s the thing that we have to actually abolish.”

This is sound history. Late 19th-century halls of power were crawling with lawmakers passionately devoted to white supremacy and industrial elites guided by the raw pursuit of profit. Their cause was simple. Millions of newly freed blacks and an increasingly rowdy and well-organized labor movement spooked those who were desperate to maintain hierarchies of class and race.

Khalil Muhammad, professor of history, race and public policy at Harvard, describes “the invention of the criminal justice system as a repressive tool to keep black people in their place from the very moment when 95 percent of the black population became free” in one interview. The invention of convict leasing, he says, had many sources, one of which “was an economic project to rebuild the South on the backs of imprisoned, leased African Americans sold to private industry.” For abolitionists, improving such a system may not be a fool’s errand, but it doesn’t meet the scale of the problem.

Any campaign of such ambitious goals can easily find itself dogged by accusations that its demands are foolish and hopelessly utopian, and that those doing the demanding don’t understand the hard realities of politics. Yet the most consistent quality I’ve found among abolitionists is a deep understanding of the limits of the political universe. It’s just that instead of accepting those limits as permanent, they insist on expanding the realm of what’s possible. And rather than rejecting anything short of every prison’s immediate demolition, abolitionists are constantly pursuing the sorts of policies that will simultaneously improve the actual lives of people impacted by incarceration while helping to build a bridge to a world where prisons are relics of a bygone era.

Prisons are a way of blaming an individual for what is structural. It forces us to look at why people are actually desperate in the first place.

“Abolition is not just about tearing things down. It's about building things up,” Walton says. “Abolition is about looking at the root causes of what's actually happening.”

It's that careful and rigorous attention to the details of our collective social life that distinguishes abolitionists from the vast field of interest groups now lining up under the banner of criminal justice reform.

“Prisons are a way of blaming an individual for what is structural,” says Rachel Gilmer, co-director of Dream Defenders, a Florida-based organization working to build a “movement for freedom and liberation,” and whose Freedom Papers have called for “an end to the current prison and policing system.” “That forces us to look at capitalism,” she adds. “And it forces us to look at why people are actually desperate in the first place.”

She goes on to lay out what a serious attack on the causes of that desperation, rather than on the desperate themselves, might actually look like: “What keeps us safe is meeting people's most basic needs. Ensuring everyone who wants a job can have one. Ensuring that our kids have access to a good quality public education. Ensuring that people have homes to live in. Ensuring that people can go to the doctor when they need to.”

It's an urgency one encounters in any conversation with those who have dedicated their lives to this work. “This isn't a theoretical thing,” says Dominique Morgan, National Director of Black and Pink, “an open family of LGBTQ prisoners and ‘free world’ allies” working towards “the abolition of the prison industrial complex.” “This work is literally about saving lives,” he adds.

Morgan, who recently celebrated ten years free from prison, goes on to echo the importance of doing everything humanly possible to make life less hellish for the currently and formerly incarcerated right now. “As a person who was incarcerated for eight and a half years, experienced 18 months in solitary confinement, suffered through a sexual assault by a corrections officer during my time inside, I can tell you my ultimate mission is that we need to create a world where abolishing the prison industrial complex is the result,” he says. “At the same time I need to make sure that my people are safe. That they're housed. That they're educated. And that we are building warriors in this war that we have.”

Importantly, this isn't an abstract thought experiment for any of these organizations. Each is up to their ears in work aimed at concretely improving the lives of those most likely to find themselves beneath the hammer of American punishment.

Black and Pink, for instance, serves 18,000 people a month, engaging in direct advocacy and re-entry support. They’re also on their way to launching a “leadership program for queer youth impacted by the system.” This is all on top of TRANSitions, a program they’ve already launched that “supports trans women who need sustainable housing.” Assata’s Daughters is deeply engaged on multiple fronts—from pushing for the removal of cops from Chicago schools to abolishing money bail and ending pretrial detention.

Abolition is not just about tearing things down. It's about building things up.

The Dream Defenders helped power the successful grassroots effort, led by the Florida Rights Restoration Coalition, to restore voting rights to roughly 1.4 million Floridians who have been convicted of felonies. (However, the Florida House recently passed a bill that jeopardizes this win by requiring ex-felons pay all court-related restitutions before being allowed to vote.)

Critical Resistance chapters are now mobilizing on everything from campaigns to oppose the construction of new jails in Los Angeles and New York, to demanding the removal of cops from Oakland schools. They’re also at the leading edge of an effort to reduce increases to Portland’s police budget and “in turn invest in voluntary, user-led and self-determined care in communities.”

This all takes place against a backdrop of rising popular distaste with the “gothic cruelty,” to borrow a phrase from political science professor Corey Robin, of America’s punishment system. Calling for reform is now the coin of the realm. All of a sudden, figures across the political spectrum are gathering behind podiums to speak of its cruelty and ineffectiveness, and passing legislation in the name of a simple idea: that the system is a trainwreck, and that now is the time to mend it in the broken places.

Like radical social reformers of every era, prison abolitionists don’t boast of having answers to every question. But they insist that the status quo can no longer endure. “Slavery, lynching and segregation,” scholar and activist Angela Davis notes in her seminal “Are Prisons Obsolete?” are all examples “of social institutions that, like the prison, were once considered to be as everlasting as the sun.”

With the progressive winds at their backs, I asked if there may now be an opening to move the debate onto more radical terrain. “In this moment when the Green New Deal is very popular and people are talking about let's divest from fossil fuels,” Gilmer begins her case, “[we need to talk about] divesting from prisons, divesting from police, divesting from our war budget. There's a real opportunity right now, and we've got to really clearly organize and articulate a clear vision for people to hold onto.”

“There is definitely an opening,” Walton says. “From Occupy to Black Lives Matter to the series of non-indictments from 2013 to 2015 of police who murdered mostly young black men but also women and girls...there's been a lot of questions around what justice actually looks like.

“And now there's a question of what we can do?”

That question is driving more and more people to the doorstep of abolitionism, Walton says, as they dare to think that another world might be possible.