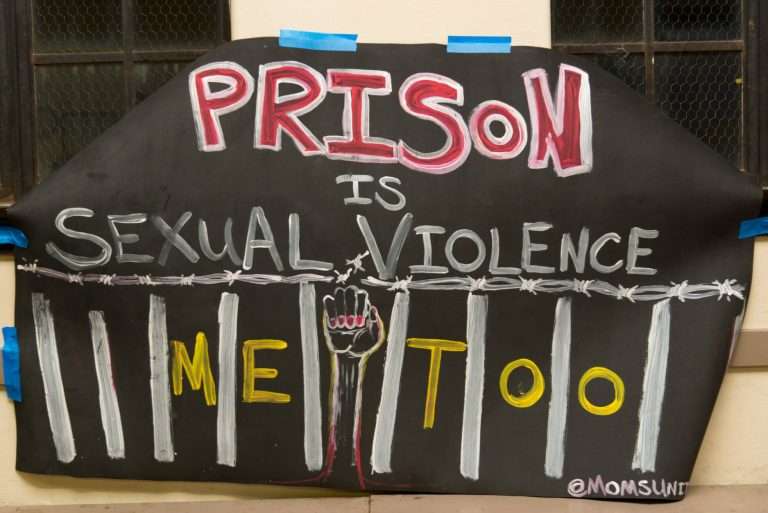 Our country has an ugly history of using police and prisons to stop sexual violence.

“Our Constitution does not allow for cruel and unusual punishment. If it did … I would allow some or many people to do to him what he did to others.” These are the words of Judge Rosemarie Aquilina, who presided over the sentencing hearing of Larry Nassar, the doctor who pleaded guilty to molesting US gymnasts under his care.

Many were quick to point out that while Aquilina’s statement may have been inappropriate coming from an officer of the court, it’s hard to fault her for being disgusted by Nassar’s actions. And in a country where nearly two out of three sexual assaults aren’t reported to the police and 994 out of 1,000 rapists walk free, Nassar is the rare perpetrator who didn’t get away with it.

But Aquilina’s barely concealed reference to prison rape — an epidemic to which an estimated 200,000 people in the US are subjected every year — calls our attention to a tension in the #MeToo moment: its relationship to the criminal justice system.

Institutional change moves more slowly than the news cycle, and it remains to be seen what efforts the post-Weinstein moment will be funneled into. The most visible development is Time’s Up, a program launched by women in Hollywood that will raise funds for working-class women facing workplace sexual abuse to file lawsuits. While survivors who want to seek justice through the courts should do so, “Lawsuits are not a strategy,” as Jane McAlevey, author of No Shortcuts: Organizing for Power in the New Gilded Age, has put it.

Directing the movement’s energy into the criminal justice system doesn’t build the power we need to stop sexual violence: It allies us with a system that’s incompatible with liberation.

It’s true that talk of prison has played a very small role in the conversation to date about sexual violence. But calls to expand criminalization, under the #MeToo banner, are already prompting lawmakers to act. In France, legislation is under debate that, in addition to formalizing an age of consent (there is none now), includes “the possibility of police warnings for everyday sexist acts such as wolf whistling and comments about physical appearance in the street,” according to the Guardian.

The BBC reports that fines, too — not just warnings — may be issued for catcalling. The bill’s author, French MP Marlène Schiappa, cites #BalanceTonPorc, the French counterpart to #MeToo, as inspiration for the push.

And France isn’t alone in testing the water of carceral-focused feminism. As the New York Times reported in October, “In Europe, several countries have moved in recent years to criminalize sexual harassment.” In 2014, Belgium, for instance, “introduced penalties including a jail sentence of up to one year for remarks intending to express contempt for a person because of his or her gender.”

The United States incarcerates people — and especially black and brown people — at unparalleled rates, and our president embraces and publicizes racist explanations for social problems. If we criminalize the behaviors called out by the #MeToo movement — those that aren’t already crimes, that is — we will end up with broader definitions of sexual harassment and assault. There will be a corresponding emphasis on greater enforcement of existing laws. And we know what that means: locking up more poor and working-class people, even when it’s so often those in power who are the worst perpetrators.

“Carceral feminism” refers to a reliance on policing, prosecution, and imprisonment to resolve gendered or sexual violence. A very early manifestation of this approach came with the UK’s Criminal Law Amendment Act of 1885. The act responded to public concern over slim evidence of the entrapment of British girls into the sex trade by raising the age of consent and outlawing “gross indecency” — which, as it happens, also gave the government a more effective means to arrest suspected gay men. (Famously, this was the law under which Oscar Wilde was convicted.)

The carceral impulse has arisen in each of feminism’s three waves and is most visible among today’s so-called sex-work “abolitionists,” who argue against decriminalizing sex work and instead for the criminalizing the purchase of sex. While intended to aid sex workers, in practice this approach leads to the isolation of workers from their systems of support and prevents them from earning a living.

Elizabeth Bernstein, a professor of women’s studies and sociology at Barnard, was the first to use the phrase “carceral feminism.” It appears in her 2007 article “The Sexual Politics of the ‘New Abolitionism.’”

She describes carceral feminism as failing to address the underlying economic conditions that exacerbate gendered violence. Neoliberalism shaped “a carceral turn in feminist advocacy movements previously organized around struggles for economic justice and liberation,” she writes. Instead of pushing for the preconditions necessary for feminist liberation, the “carceral turn” restricts feminist horizons to the individual and the punitive, rather than the collective and redistributive.

What does carceral feminism look like in practice? In the 1970s, class-action lawsuits filed by women against police departments that either ignored domestic violence calls or provided inadequate services — however well intended — spawned an approach to the issue of domestic violence overly reliant on prisons and punishment. Such cases resulted in the 1994 Violence Against Women Act, or VAWA for short, which was included in the largest crime bill in US history. It was a $30 billion piece of legislation that, among other things, funded the hiring of 100,000 new police officers across the country.

What grew from carceral feminism’s efforts to combat domestic violence should concern us all. Another example: Today, nearly half of all states have a mandatory arrest law, which requires that if someone places a call to law enforcement about domestic violence, the police must arrest someone in response.

In practice, this sometimes leads to victims being arrested. The decision is based on the officer’s perception of the situation, as well as any police record the victim or the perpetrator may have. But officers’ perspectives may be skewed: Studies have found that at least 40 percent of police officer families experience domestic violence, significantly higher than the 10 percent of families in the general population, according to the National Center for Women and Policing.

Moreover, there is a well-established pattern of police officers committing rape and sexual assault against those they arrest. Sexual misconduct is the second most commonly reported form of police misconduct. (A 2015 investigation by the Buffalo News concluded that an officer is accused of sexual misconduct every five days.) Given such statistics, empowering police to adjudicate domestic violence is indefensible.

Even the act of calling 911 itself can ruin a victim’s life. The Princeton sociologist Matthew Desmond records in his book Evicted how female tenants are often forced from their homes for making 911 calls about domestic violence since landlords often use police calls to their property (on any subject) as grounds for removal. What’s more, “nuisance” property ordinances allow police to punish landlords if too many 911 calls are made from their properties. Landlords are sometimes told to evict the source of the calls, even if that person is a domestic violence victim using 911 as a lifeline.

It’s not that VAWA itself, or the actions of survivors seeking assistance from the state, are bad or wrong. Rather, the problem is that the push for carceral solutions to social problems drowns out calls for social and economic justice. As Victoria Law, author of Resistance Behind Bars: The Struggles of Incarcerated Women notes: “[P]oliticians and many others who pushed for VAWA ignored the economic limitations that prevented scores of women from leaving violent relationships.”

Shortly after Bill Clinton signed VAWA into law, the president kept his promise to “end welfare as we know it.” His Personal Responsibility and Work Opportunity and Reconciliation Act attached time limits and work requirements to welfare use while banning access to public benefits for those convicted of drug felonies. Rather than focusing on providing victims of domestic violence ways to escape abusive situations — such as funding public housing and the social safety net — the Clinton administration emphasized the punishment of abusers as the feminist priority, even as it undermined scores of working-class women with welfare reform.

Many of those who could be described as carceral feminists reject the label as inaccurate. Today, most self-described progressives recognize the problems with our criminal justice system. And it’s undeniable that it’s often state actors, not feminists, who are most prone to see incarceration as the answer to all our social problems.

But as a movement, it is up to us to know the ugly history of feminism’s entanglement with the criminal justice system if we want to avoid letting our words and actions be used to justify policies we oppose.

We know by now that laws are unequally enforced in this country. While Harvey Weinstein may be facing charges, his powerful counterparts — the unknown numbers of Wall Street traders, media executives, and political leaders who have committed less-well documented assaults — are not the ones who will be swept into the criminal justice system. Instead, it will be the poor and working class — especially those from communities of color — who suffer, as feminists cheer on the enforcement of laws that offer police one more excuse for violence and harassment.

We must be precise in our designation of what is at the root of this scourge: power. Sexual harassment and assault are pervasive in our society because extravagant wealth and absolute poverty are pervasive. No, the most equal society on Earth would not be entirely free of interpersonal violence; it would, however, provide far less structural power for perpetrators to hold over their victims. To reduce this violence, we must reduce inequality.

That means redistributing wealth so no one can attain the immunity Weinstein enjoyed for decades. It means expanding the social safety net so survivors don’t needto remain with abusers. It means delinking health care from employment status so that one’s health doesn’t depend on remaining in an abusive workplace. It means the provision of citizenship to the undocumented so that supervisors can’t threaten the most vulnerable among us with deportation to ensure their acquiescence. And it means strengthening unions, so working people have recourse against retaliation for speaking up.

Any survivor of sexual violence can use the criminal justice system to seek justice, safety, or compensation if she so chooses. But as a movement, we should prioritize demands that can prevent sexual violence before it happens, assist survivors in leaving abusive environments, and remove the many barriers that keep women quiet. While a carceral feminist like Judge Aquilina may not envision justice that doesn’t beget more violence, we can.

Alex Press is an assistant editor at Jacobin and a PhD student in sociology at Northeastern University. You can follow her on Twitter @alexnpress.